You are here: Home

Namibia is divided into various vegetation zones. The Naukluft and its environs belong to the escarpment zone, which is characterised by species richness and the occurrence of many endemics. Of particular note is the Commiphora glaucescens, a dwarf tree with a glossy, golden yellow bark. Two species endemic to Namibia are mainly found in the Naukluft area. They are Euclea asperrima, the mountain quarri, and the Rhuss volkii, the Naukluft Rhus. 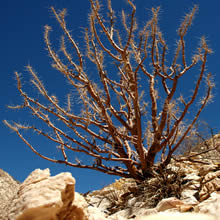 Due to their diversity, the Naukluft’s flora and fauna are truly fascinating. Here the visitor can witness noteworthy and rare natural phenomena. Because the Naukluft straddles two climatic zones, rainfall can occur throughout the year. The average rainfall measures between 50 and 300 mm per annum.

According to the 1971 vegetation map issued by Willy Giess (1971), the vegetation is categorised in the transitional savannah and semi-desert – or escarpment – zone. Although the rainfall is limited and irregular in this area, there can also be massive downpours that cause extensive erosion due to the sparse vegetation.

Any visitor who would like to learn more about Namibia’s flora is bound to visit the Naukluft sooner or later. Its vegetation includes an abundance of highly noteworthy plants and plant communities. 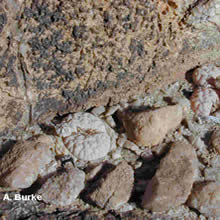 In respect of its flora, the Naukluft belongs to one of the most species-rich zones in Namibia. Over 400 plant species – almost 10% of Namibia’s entire flora – have been discovered here to date. This is due not only to the relatively high degree of botanical research conducted here, but also to the unique combination of environmental factors. The different levels of elevation, the diverse subsoils that have arisen through the complex geology, and the influence of occasional winter rainfall could be regarded as the principal reasons for this species richness. The ruggedness of the Naukluft massif, with its limited access to mankind and wildlife alike, has secured this area from all forms of overutilisation. Thus, one also finds some plants here that are characterised with the Karoo. These comprise mainly dwarf shrubs that belong to plants with composite flowers, e.g. Eriocephalus and Pteronia species, typical elements of the Namib Desert, like the grey desert-brush (Calicorema capitata), and a part of the particularly diverse flora of the pro-Namib such as various species of Commiphora, Cyphostemma bainesii, and Euphorbia guerichiana. 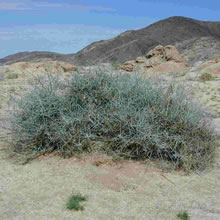 The diversity of habitats has facilitated this great assortment of plant life. Rock overhangs are made up of a variety of rock types like dolomite, quartzite and shale, which have resulted in different soil chemistries. Moist habitats such as the springs and seepage areas in the rivers
host plant life that is associated with such environments. Sages, aromatic, mint-like herbs and water-loving grasses are, therefore, not uncommon.

As in other mountainous regions of the country, typical winter rainfall flora have established themselves here as well. On the highest peaks one will find, amongst others, Lithops, Ebracteola and Crassula species. 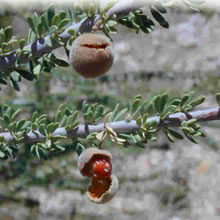 Plants with a more restricted range – the so-called endemics – also occur here. There are none that are restricted to the mountain massif itself, but there are some species that only occur in its vicinity, especially along the escarpment and similar habitats. These species include the shrubs Euclea asperrima, Lebeckia obovata, and Rhus volkii. (http://www.enviro-science.info) More information about the flora of the Namib can be found in the plant field guide series by Dr Antje Burke( http://www.enviro-
science.info/about_us/reflist.htm). * Photos Antje Burke 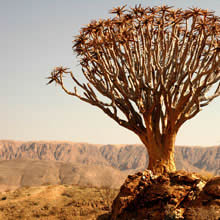 On the rock overhangs of the Naukluft one usually encounters well-developed quiver trees (Aloe dichotoma), Euphorbia species and Commiphora species, of which the C. glaucescens is the most common.

On the lower slopes of the gorge one finds Sterculia species, stinkbush (Boscia foetida, and the shepherd’s tree (Boscia albitrunca). Amongst the most noticeable herbs is the resurrection plant (Myrothamnus flabellifolius), which covers entire rocky slopes in some parts of the valley.

Even the river valleys attend wondrous tree growth. Mighty camelthorns (Acacia erioloba) adorn the Tsondab Valley, and in all the smaller valleys you will find sweet thorn (Acacia karroo), wild ebony (Euclea pseudebenus), and ana trees (Faidherbia albida). In all the ravines one will also come across great fig trees such as the Namaqua fig (Ficus cordata), the common cluster fig (Ficus sycomorus), and the laurel fig (Ficus ilicina), as well as the wild olive (Olea europaea). In the plains at BüllsPort, Blässkranz and Ababis, wild tamarisks (Tamarix usneoides) occur as well. 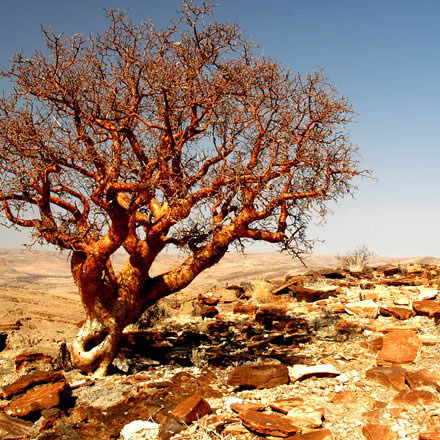 The plains are generally covered in grass, punctuated by a few small shrubs. Boscia foetida, a small shrub species, dominates the landscape. On the small riverbeds and river courses other tree species also occur.

An imposing array of trees along the Tsondab accompanies the river quite deep into the desert. The trees only begin thinning out at the Tsondab Vlei, where one discovers thousands of dead specimens whose branches jut out here and there between the shifting sands of the dunes. 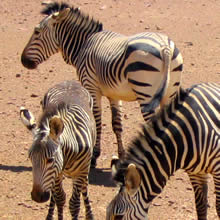 Prev Next
Cookies make it easier for us to provide you with our services. With the usage of our services you permit us to use cookies.
More information Ok